Description of the algorithm

The following is a basic description of the locally optimal block preconditioned conjugate gradient algorithm as implemented in the file eigen_lobpcg_inc.F90. Locking of already converged eigenvectors is omitted.

we form the column matrix

and solve the eigenvalue problem

by the following iterative procedure:

of the Cholesky factorization.

2. Get initial Ritz-vectors and -values:

eigenvalue problem for all

Save the initial eigenvalues in a vector:

and set the conjugate directions to zero:

4. Terminate convergence loop if all residuals are below a certain threshold.

6. Apply the preconditioner to the residuals: 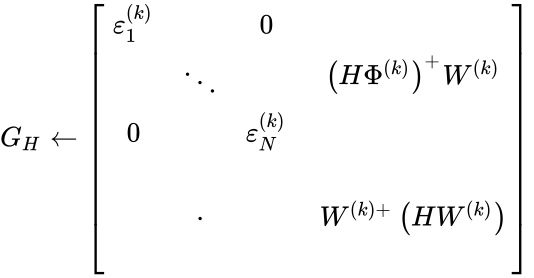 11. Partition the column-matrix of the results into two or three block matrices of

12. Calculate new eigenvectors and, if

Despite solving only a standard eigenvalue problem

, it does not work to use the usual Rayleigh-Ritz procedure, i. e. solving

, because this is unstable. The reason for this is that not all the vectors in the subspace are orthogonal, i. e. the

matrix is not identity. One could do an orthogonalization step before doing the Rayleigh-Ritz procedure but this is more computationally expensive (Thanks for Andrew Knyazev, the inventor of the algorithm, for explaining this to me).

The LOBPCG implementation in Octopus is parallelized in states and in domains. In other word, the column matrix of states

is distributed on the nodes as

So, we see the real-space points are distributed in the

direction (by the states_distribute_nodes routine).

We now describe the communication and computation pattern used for the parallel implementation of the two operations.

Each node can at first calculate the product of its two local blocks and write the result to the corresponding block. Then the blocks of

are rotated to the left, i. e. the distribution now looks like this:

Now, each node again does the product of its two local blocks but this time writes the result right next to the previous result. If there is no right block, we circle to the first block. This is scheme is iterated

times until all blocks have entries.

The intermediate local results on the nodes now consist of one summand for each block, for example for node hosting the

To obtain the full result, we simply do an MPI_Allreduce to sum up all contributions.

The algorithm used here is basically a variation of Cannon's algorithm. In the original algorithm the blocks of the first matrix are rotated upwards. This scheme leads to a distribution of the result and would require an additional MPI_Alltoall because we need the result matrix on all nodes. By omitting the downward rotation and replacing the MPI_Alltoall by an MPI_Allreduce we obtain a faster implementation.

To have everything explicit, we write down the algorithm. Let

be the result matrix and

the blocks currently living on node with coordinates

To complicate things, we observe that we can overlap the rotating of

with the calculation of

. That is, while calculating the product, the new block for

is being received and the old one sent away. This leads to the following algorithmic formulation with send and receive buffers

This is how the operation is implemented in the code using MPI_Isend and MPI_Irecv and the cartesian topology facility of MPI to obtain the rank number of the neighbour.

One subtle issue is that the blocks need not be of the same size but this is handled by providing a communication buffers the largest block fits in.

There remains not much to say about this routine. It uses the same communication pattern as the Xstates_blockt_mul operation except that it rotates the blocks of the

is known on all nodes. As the result is distributed, no need for an allreduce steps arises.